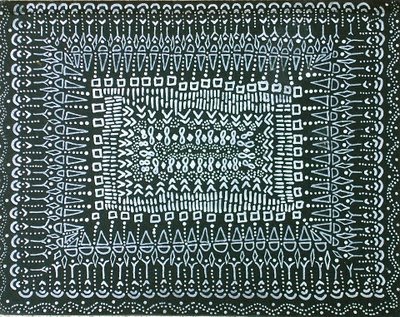 I realized the kids at art school were much cooler than I was when I got there with my plain black sketchbook, and theirs were all painted and drawn-on and beautifully tattered. I had a lot to learn. But, armed with supplies, I was up to the task.

I’m giving my girl a leg-up by introducing her to the concept of arting up her sketchbooks early on in life. Only then will she have the self-confidence to face the other kids at art school in 9 years. Of course, by then, all the kids will have had solo museum shows at age 17, so who am I fooling?

In any event, we still had fun with Fen’s sketchbook. We primed the cover with 2 coats of gesso first. We don’t bother to sand the gesso or try too hard to smooth it out with the brush, because we like the texture. After it had dried, Fen decided she wanted to collage the cover with small pieces of rice papers. Alternatively, you can use non-bleeding tissue paper. After the glue had dried, she brushed a layer of Mod Podge over the cover and let it dry. She had used Mod Podge in art class before, but I was a little excited, as I was a Mod Podge virgin. How cool! The Mod Podge gave it a beautiful finish- you can see all the little rice paper fibers.

Now you obviously need some ideas to fill your sketchbook, and I have 50 sketchbook ideas right here.