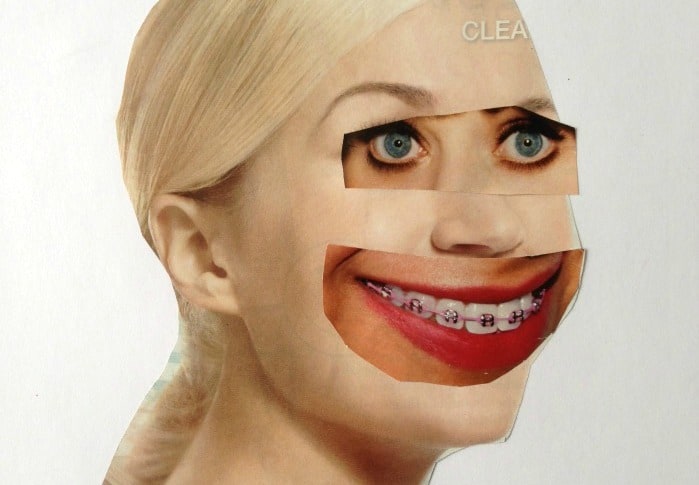 One of the funniest art projects in all the land is to take a pile of fashion magazines, some scissors, a glue stick, and a stack of paper and get to collaging. We’re not talking serious collaging, though. We’re getting all surreal and silly.

When you flip through the pages of women’s magazines and really take a look at some of the poses and expressions on the models’ faces, they are HILARIOUS. Like, really, really weird. I enjoy making them even more weird by mixing up their features and creating my own new race of superhuman model-freaks.

Not that the photos of them are real to begin with, what with all that Photoshopping- I’m merely pushing them a little further. I think this might be a fun project for tweens and teens, come to think about it, to help dispel the idea of magazine perfection. Aspire to these unattainable looks, girls. Approach this however you want- I flipped through a couple of Seventeen magazines, ripping out whole pages that held promising facial features. I initially went for the largest faces, and then added in some smaller ones. The very smallest people didn’t make the cut.

Then I cut out a bunch of mouths and eyes- sometimes the eyes stayed together; other times they were separated. A few noses were included. Yes, in case you were wondering, I felt a bit like a serial killer, but I refrained from taping the images up on the wall with creepy scrawled notes.

I had fun mixing tiny eyes onto big faces, and enormous, puffy lips onto small, demure faces. How awesome do Zooey Deschanel’s eyes look mixed with a brace-face? Beckett joined in on the fun. Kids have a natural surreal/weird side. He had as much fun as I did. Paint By Numbers for Beginners

How to Crochet the Cutest Babies Sandals