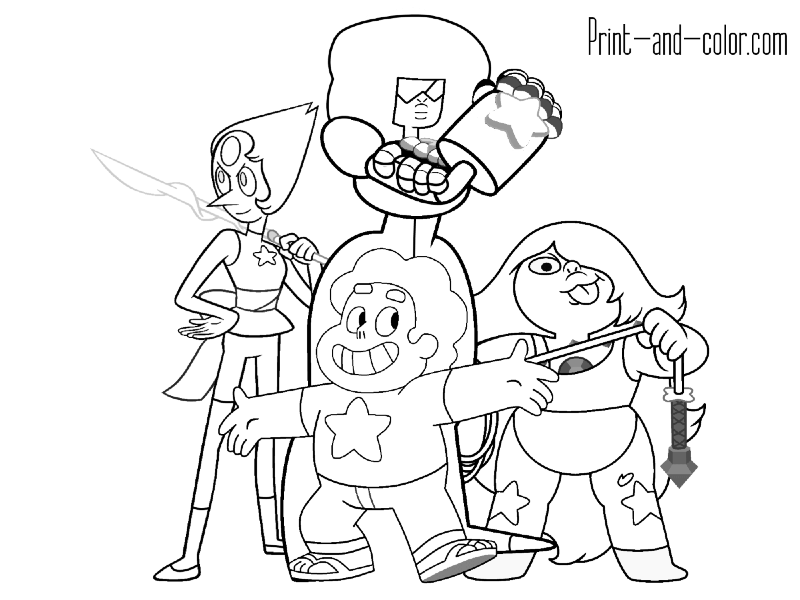 Steven Universe is an animated series that has garnered quite a following! With its bright colors, beautiful animation, messages of acceptance, and relatable characters it’s no wonder it’s become so popular. Focusing on Steven, and his adoptive alien family, the Crystal Gems, Steven Universe is a totally new twist on the classic coming of age story.We’ve rounded up 15 of the best Steven Universe coloring pages from around the web for you to enjoy and channel your inner artist. Have fun coloring!

Source:https://www.bestcoloringpagesforkids.comThe best place to start is with titular Steven himself! This coloring page features Steven in his normal state, excited! Steven fills the whole Pages and the picture has large, easy to color in areas. Don’t forget to color in his favorite red shirt!

Next let’s color one of Steven’s adoptive Crystal Gem mamas, Pearl! On this page, Pearl looks triumphant, ready to take on a battle or maybe deal with some of Steven’s mischief.

This page gives plenty of space to color Pearl, with some extra room on the sides to add some of her accessories if you’d like. You can color in her lovely mint-colored outfit or give her a brand new look!

Source:http://print-and-color.com/steven-universe-coloring-pages/If Steven is getting into some sort of predicament, you can bet Amethyst will be right by his side, either helping him out of trouble or helping him to cause more. This fun-loving purple Crystal Gem is a lot of ferocity in a small package. On this coloring page, she looks tough and ready for action, with her long hair flowing behind her. Source:https://coloring-pages.info/steven-universe-garnet-printable-coloring-pages-book-20765Steven’s third Crystal Gem mom is Garnet. The tallest and strongest of the three Crystal Gems, Garnet is a formidable opponent with a heart of gold. She shows her soft side with Steven, helping him to learn and grow. This picture of Garnet leaves a lot of her outfit blank, so you can design whatever look you’d like for Garnet.

5. Steven and the Crystal Gems

Source:https://coloringhome.com/coloring-page/1876052?album=steven-universe-coloring-pagesThe gang’s all here! This coloring page is of all three Crystal Gems; Pearl, Amethyst, and Garnet, and their adoptive son, Steven Universe. Steven stands happily in front of the Crystal Gems, ready for you to color them all in. Source:https://coloringhome.com/coloring-page/1876098?album=steven-universe-coloring-pagesSteven doesn’t just have three adoptive alien moms, he also has a human dad, Greg Universe. This coloring page is a heartwarming picture of Greg Universe and baby Steven Universe. It’s the perfect picture to color for Fathers Day. One of the coolest things about the Crystal Gems is their ability to fuse into one! When Amethyst and Pearl fuse, they become Opal. Opal is an amazing archer and is always there to protect Steven when she’s called upon.

On this coloring page, Opal stands tall, with her four arms and enormous ponytail. 10. Steven and his Shield

Source:https://www.bestcoloringpagesforkids.com/Steven’s preferred weapon is a shield, which isn’t exactly a weapon at all. All the Crystal Gems can summon a weapon, and Steven was shocked to see a shield instead of a sword when he first summoned it, but it’s the perfect object for Steven’s protective personality.Steven is seen jumping high with his trusty shield in hand on this coloring page. Source:https://coloring-pages.info/steven-universe-connie-printable-coloring-pages-book-20755Steven doesn’t just hang out with aliens, he also has human friends too. His best friend and ally is Connie Maheswaran. Connie and Steven go from hanging out and watching television together to fighting side by side.This coloring page is an adorable picture of a happy Connie holding the sword Pearl showed her how to use. It makes total sense that with such a close friendship, Steven and Connie would eventually form their own fusion. And they did! Stevonnie is the perfect mixture of Steven and Connie, representing the best of both.

Here Stevonnie is pictured ready for a fight with their sword, like Connie, and their shield, like Steven.

Ruby is the second half of Garnet. Ruby is a rowdy gem who is always up for a brawl. Garnet’s battle spirit is embodied by her. When Ruby and Sapphire first fused, they were taken aback, but once they were together, they realized they’d never want to be apart again.Ruby is seen bowing and wearing her signature bandana on this coloring page. Source:https://www.coloringpages101.com/Steven-Universe-coloring-pages/80832-Ruby-Steven-Universe-coloring-pageRuby is the second half of Garnet. Ruby is a rowdy gem who is always up for a brawl. Garnet’s battle spirit is embodied by her. When Ruby and Sapphire first fused, they were taken aback, but once they were together, they realized they’d never want to be apart again.Ruby is seen bowing and wearing her signature bandana on this coloring page. This is a coloring page of Smoky Quartz and its powerful yoyo, which can generate mighty winds.

We hope you enjoy these Steven Universe coloring pages!

20 Beautiful African Art Projects For Kids to Make at Home

A Toothbrush Fit For an Elephant