Today’s your lucky day: learn how to make pretty shamrock origami. It’s a great St. Patrick’s Day craft activity or a cute way to wish someone good luck before a big milestone.We picked three different versions of shamrock origami, from a super simple version that even kids can do, to a very elaborate shamrock that’s sure to impress anyone who sees it.

Source: By Origami Kawaii, “Heart Four Leaf Clover Origami Paper Tutorial” (https://www.youtube.com/watch?v=MnCQtQCXn4c)Difficulty level: Easy Use this simple origami tutorial to decorate a “Good Luck!” card or a St. Patrick’s Day poster. The instructions are similar to folding an origami heart – you just repeat the steps four times, then stick them on cardstock. This is a relatively easy tutorial, since you can work with larger and heavier pieces of cardstock, and the shape is very forgiving and does not require a lot of precision. That’s why it’s good for older kids, or someone trying origami for the first time.If you like, you can also attach the “leaves” to a stick or small branch (use a hot glue gun) and use it to decorate flower pots or give as gifts.

Source: By Easy Origami, “Four-Leaf Lucky clover / How to make / origami / Easy DIY” (https://www.youtube.com/watch?v=4twJLFEaOxk) Difficulty level: Medium This origami tutorial only needs one sheet of paper to create a lovely, three-dimensional paper shamrock. It’s best to use a thin sheet of paper since you need to make sharp and crisp creases to get a good line.Watch the video tutorial and follow the steps below. Don’t worry if your first attempts look a bit wobbly. Practice and patience make perfect! 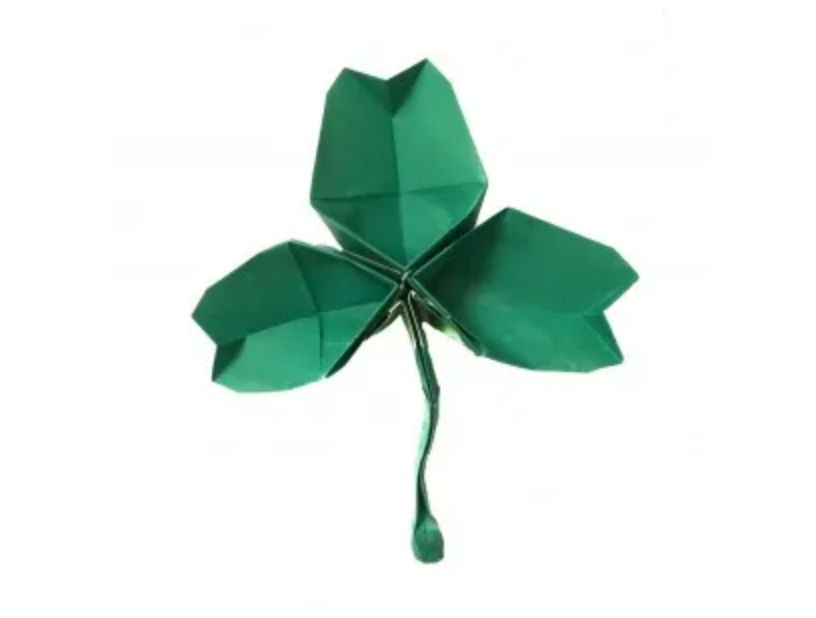 Source: By Russell @ Origami Expressions, “An Origami Shamrock: Happy St. Patrick’s Day!” (https://origamiexpressions.com/origami-shamrock-happy-st-patricks-day) This shamrock not only looks pretty, but it can also serve a practical purpose. The petals are deep enough to hold small candy, paperclips, and other knick-knacks. You need to use thin and crisp paper that can hold its shape after being carefully creased. You can use origami paper or kami paper, or some kind of scrapbook paper. It should be cut into a perfect square ““ the ideal size is 9 x 9 inches, but you can also use 12 x 12 to make a bigger dish.

The video tutorial is fairly easy to follow and has both English and Spanish subtitles. The written instructions are below.

Why stop at shamrock? Just change the color of the paper, and they will look like a flower. Add other embellishments, like glitter or beads, and you can even use them to make paper bouquets or tree ornaments. Have fun!