T310 PL 92-93
Affiliate links may be used within. See my disclosure for more informationhere.

I happened to have zero self esteem when I was a freshman in college. I mean, I knew I had some talent since I got into all the art schools I applied to, but I was insanely intimidated by the other kids who seemed far cooler and more at ease with being on their own for the first time and choosing a major.

When I chose painting as a major, it was based on a pure love for painting. When I got to the first day of painting, I internally freaked at:

1. All the hipster art boys who knew a lot about painters

2. The idea of being ‘taught’ to paint

I suddenly wanted to keep painting pure and unlearned. I wanted to get through art school without having picked up other peoples’ ideas of what making paintings should be.

It sounds so pretentious in a way, but 4 years later, when I discovered Outsider Artists, I identified with their sensibility and simplicity and pure emotion. I’ve always been drawn to straightforward, unpretentious art, and I first discovered that with traditional African masks.

The paintings I made in my 20’s came from my heart, and I taught myself how to get the acrylic paints to do what I wanted. I painted whatever I felt like, without the ghost voice of a professor popping in to my head to influence me.

Back to Outsider Artists. If you don’t know what this means, they essentially are people who make art without having been formally taught art. They are people working outside of the traditional art world, and sometimes their art isn’t even discovered until after their death. Some of these artists are mentally ill, some are isolated from the rest of the world, some just identify as Outsider Artists, based on the intuitive nature of their work.

Bill Traylor was the first outsider artist I happened upon, and still probably my favorite. Born into slavery in Alabama in 1853, he didn’t start painting until he was 85.

Henry Darger – Oh my goodness. You haven’t lived until you’ve been to a Henry Darger exhibit, slowly becoming more and more uncomfortable with each work you look at. Uncomfortable in a fascinated way, of course.

Darger’s work was discovered by his landlord right before his death, and he had worked as a janitor. His art and accompanying 15,000 page manuscript described a dystopian world where mixed-gender children abounded. images via here and here

I previously featured the art of Emily Kame Kngwarreye, who was a new discovery for me, here, and despite her lack of training and contact with the art world, her work is so modern and lovely. Center for Intuitive and Outside Art

Jessica Yu’s documentary of Henry Darger – this is the trailer

Hop on my email list and I will send you a free 5-day creativity reboot! Inspired By Zentangle: Patterns and Starter Pages of 2020 How to Use Colored Paper as Your Drawing Tool Acrylic Paint Transfer is The Coolest Grab Some Flowers and Pound Them to Make Art Now You Can Restore Your Own Priceless Art 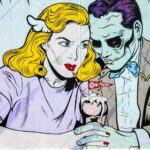